skip to main | skip to sidebar

Posters of the Week 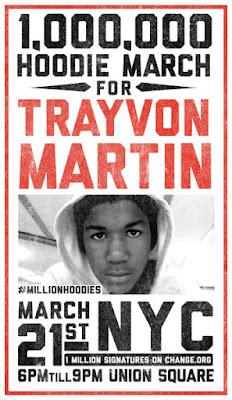 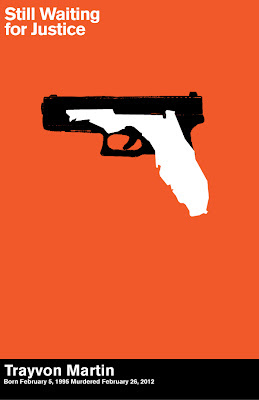 On the 44th anniversary of the assassination of Martin Luther King, Jr., April 4, 1968, CSPG’s Posters of the Week commemorate the tragic death of Trayvon Martin, 17.

The story is now well-known: On February 26, 2012, Trayvon was shot to death in Sanford, Florida, by George Zimmerman, a neighborhood watch captain, who stalked and then fatally shot the unarmed youth while Trayvon was returning from a convenience store. That Zimmerman was not arrested and allowed to keep his gun continues to fuel the national outrage.

But initially, the case received little press attention, and for the first 10 days after Trayvon's death, the story was only covered by the Florida media. Not until March 8, 2012, did the national media begin covering the case. And much of the subsequent attention is thanks to grassroots efforts.

On March 17, Maria Roach, Maryland resident and mother, began circulating a petition through MoveOn.org, demanding justice for Trayvon Martin. Nine days later, she delivered more than 500,000 signatures to the Department of Justice in Washington. If you want to add your signature: http://www.moveon.org/r?r=272971&id=37516-3264124-0OR8AXx&t=2

The case continues to polarize the nation, and demonstrations demanding justice for Trayvon, and the arrest and trial of George Zimmerman, have taken place throughout the U.S., including Miami, Chicago, Los Angeles, San Francisco, Indianapolis and New York. Many demonstrators wear “hoodies” to protest the stereotyping and racial profiling that led to this tragedy.

The two posters included here are very different, but both are inspired by the same tragic event. The first, done anonymously, has helped mobilize demonstrations around the country. The second, by Hunter Langston, a professional graphic designer, places the event in the context of Florida’s controversial “Stand Your Ground” law, as well is in the larger national debate around the need for gun control.

DemocracyNow.org also has numerous articles and interviews regarding Trayvon Martin.

Posted by Center for the Study of Political Graphics at 6:35 PM

How to Donate Posters

CSPG depends upon the donation of posters and prints to make this resource as representative as possible of the many historical and ongoing struggles. CSPG collects graphics with overt political content that were produced in multiples—including offset, silkscreen, stencil, digital output, woodcut, linocut, etc. Old and contemporary posters, as well as duplicate posters, are welcome.

To donate posters, rent an exhibition, or for more information on the Center for the Study of Political Graphics, please visit our website: www.politicalgraphics.org

Center for the Study of Political Graphics