skip to main | skip to sidebar

Poster of the Week 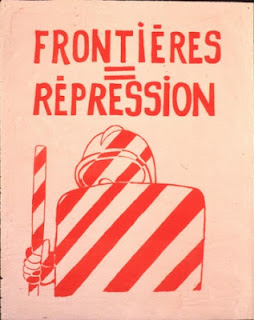 It’s May.  There’s an unpopular war raging on the other side of the world.  Students are protesting and the police respond with violence.  There is high unemployment, growing poverty and immigrants are frequent targets of workers’ frustration.   It could be the  in 2012, but it is  1968.


In May 1968, 11 million workers went on strike throughout . It was the largest general strike ever, and brought the economy of  to a virtual standstill.  It grew out of pent-up anger and frustration over poverty, unemployment and the conservative government of Charles de Gaulle.


The mass movement for social change began with a series of student protests and strikes that broke out at a number of universities in , following confrontations with university administrators and the police. The de Gaulle administration attempted to quell those strikes by force, but the brutality of the police only inflamed the situation further.  The demonstrations soon spread into factories and resulted in an unprecedented general strike. More than 22% of the total population of  participated in the strike which went for two weeks, and almost caused the collapse of the government of President Charles de Gaulle.


The faculty and student body of the Ecole des Beaux Arts, were on strike, and a number of students met spontaneously in the lithographic department to produce the first poster of the strike. On May 16th, art students, painters from outside the university and striking workers decided to permanently occupy the art school in order to produce posters that would, "Give concrete support to the great movement of the workers on strike who are occupying their factories in defiance of the Gaullist government." The posters of the ATELIER POPULAIRE were designed and printed anonymously and were distributed for free. They were seen on the barricades, carried in demonstrations and were plastered on walls all over . Their bold and provocative messages were extremely influential and still resonate in our own time.   CSPG’s Poster of the Week was produced during this movement, and focuses on immigrant rights.


Statement by the ATELIER POPULAIRE

"The posters produced by the ATELIER POPULAIRE are weapons in the service of the struggle and are an inseparable part of it. Their rightful place is in the centers of conflict, that is to say, in the streets and on the walls of the factories. To use them for decorative purposes, to display them in bourgeois places of culture or to consider them as objects of aesthetic interest is to impair both their function and their effect. This is why the ATELIER POPULAIRE has always refused to put them on sale. Even to keep them as historical evidence of a certain stage in the struggle is a betrayal, for the struggle itself is of such primary importance that the position of an "outside" observer is a fiction which inevitably plays into the hands of the ruling class. That is why these works should not be taken as the final outcome of an experience, but as an inducement for finding, through contact with the masses, new levels of action, both on the cultural and the political plane."


Johan Kugelberg, editor and Philippe Vermes, Beauty is in the Street, A visual Record of the May’68  Uprising, Four Corner Books, , 2011.
Posted by Center for the Study of Political Graphics at 11:53 AM

How to Donate Posters

CSPG depends upon the donation of posters and prints to make this resource as representative as possible of the many historical and ongoing struggles. CSPG collects graphics with overt political content that were produced in multiples—including offset, silkscreen, stencil, digital output, woodcut, linocut, etc. Old and contemporary posters, as well as duplicate posters, are welcome.

To donate posters, rent an exhibition, or for more information on the Center for the Study of Political Graphics, please visit our website: www.politicalgraphics.org

Center for the Study of Political Graphics